Sun Damage Pigmentation, Bexleyheath| Persona Medical Aesthetics
Book a Free Consultation
Send us your details to book your free consultation with one of our doctors. 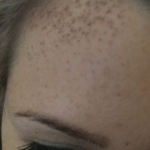 as dark brown freckles or dark brown / black spots, also known as age spots, liver spots, or pigmentation. They vary in size and are usually found on the areas of the body that have most sun exposure such as the face, chest and backs of hands. Medically known as solar lentigines, these flat brown spots are caused by increased pigmentation as a direct result of too much sun and environmental damage.

Sun exposure causes most of the skin changes that we think of as a normal part of ageing. Over time, the sun’s ultraviolet (UV) light damages the fibres in the skin called elastin. When these fibres break down, the skin begins to sag, stretch, and lose its ability to go back into place after stretching

Excess pigmentation, or darker areas of skin, can also be related to hormonal imbalances, medically know as melasma or chloasma and can commonly appear in females either taking oral contraception or during and after pregnancy. Pigmentation can also be caused by skin condition such as post acne, cuts, open wounds, inflammation and surgery.

The most common areas of concern are:

A free of charge skin consultation & Skin scan & analysis at Persona Medical Aesthetics is booked before any treatment with us, even if it is a medical appointment. The reason for this is any medical treatment carried out on your skin will have longer lasting and more noticeable results if your skin is healthy.Many skin concerns and conditions start from deep under the skins surface, making them hard to diagnose with the naked eye. If the condition is left until the point of it being visible on the skins surface it can sometimes mean that it will be more difficult to treat.

At Persona Cosmetic Medicine our highly skilled team of medical & aesthetic practitioners offer a range of simple non-surgical treatments that can significantly help reduce & lighten sun damage and pigmentation through the following treatments:

Jump to the top